Androgenetic Alopecia – Most Common Type of Hair Loss
The most common reason for hair loss in both men and women is a genetic condition known as Androgenic Alopecia. Men with this condition, called male pattern baldness, can begin suffering hair loss as early as their teens or early 20s. It is characterized by a receding hairline and gradual disappearance of hair from the crown and frontal scalp.

Women with this condition, called female pattern baldness, do not experience noticeable thinning until their 40s or later. Women experience a general thinning over the entire scalp, with the most extensive hair loss at the crown.

Androgenic alopecia is caused by the presence of excessive Dihydrotestosterone (DHT). DHT is created as a result of the conversion of the male hormone Testosterone that reacts with the enzyme 5-alpha reductase in our hair follicles. DHT causes clogging, weakening hair follicles and causing them to shrink and become dysfunctional.

As a result, healthy hair cannot survive and stops growing completely. Thinning hair can quickly progress to irreversible baldness. This is why it is important to start on an effective treatment in the early stages of hair loss. 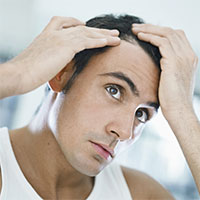 Male Pattern Hair Loss
The male pattern baldness (MPB) form of androgenetic alopecia accounts for more than 95% of hair loss in men. While there are many possible reasons people lose hair, including serious diseases, reaction to certain medications, and, in rare cases, extremely stressful events, most hair loss in men can be blamed on heredity.

What male pattern baldness sufferers inherit are hair follicles with a genetic sensitivity to dihydrotestosterone (DHT). Testosterone converts to DHT with the aid of the enzyme 5-alpha-reductase. Hair follicles sensitive to DHT begin to miniaturize, shortening the lifespan of each hair follicle affected. Eventually, these affected follicles stop producing cosmetically acceptable hair. Conversely, when DHT is suppressed, hair follicles continue to thrive.

The Norwood-Hamilton Scale (categories numbered 1-7) is used below to describe the level of development of Male pattern baldness. 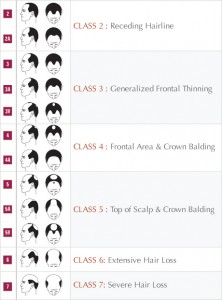 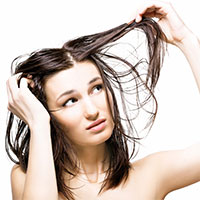 Female Pattern Hair Loss
There are a multitude of reasons for the female pattern hair loss form of androgenetic alopecia. It can be caused by an imbalance of thyroid hormones or pregnancy, diseases, or certain types of medications, which can influence hair’s growth and shedding phases. The loss may be a temporary or permanent phenomenon depending on the cause of hair loss. Women’s hormone levels decline as menopause approaches and drop sharply after menopause, possibly resulting in a more aggravated form of hair loss for some ladies.

Women will usually experience female pattern hair loss when an oval area of thinning is seen over the top of the scalp. This may progress from mild to moderate, to severe diffuse thinning, with the preservation of an intact frontal hairline. This female pattern of diffuse thinning is occasionally seen in men. Bi-temporal recession of hair may be seen, but usually not of the severity seen in men.

In females, the hair loss is significantly delayed over the male counterpart with a similar genetic background, often by a decade. Thus, onset of this condition can often occur between 25 and 35 years of age for women. An estimated 31% of adult women are believed to suffer from varying degrees of female pattern hair loss. 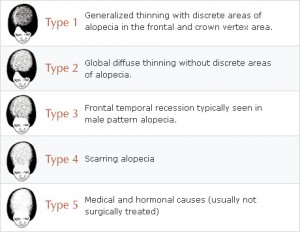 Other factors that contribute to hair loss: